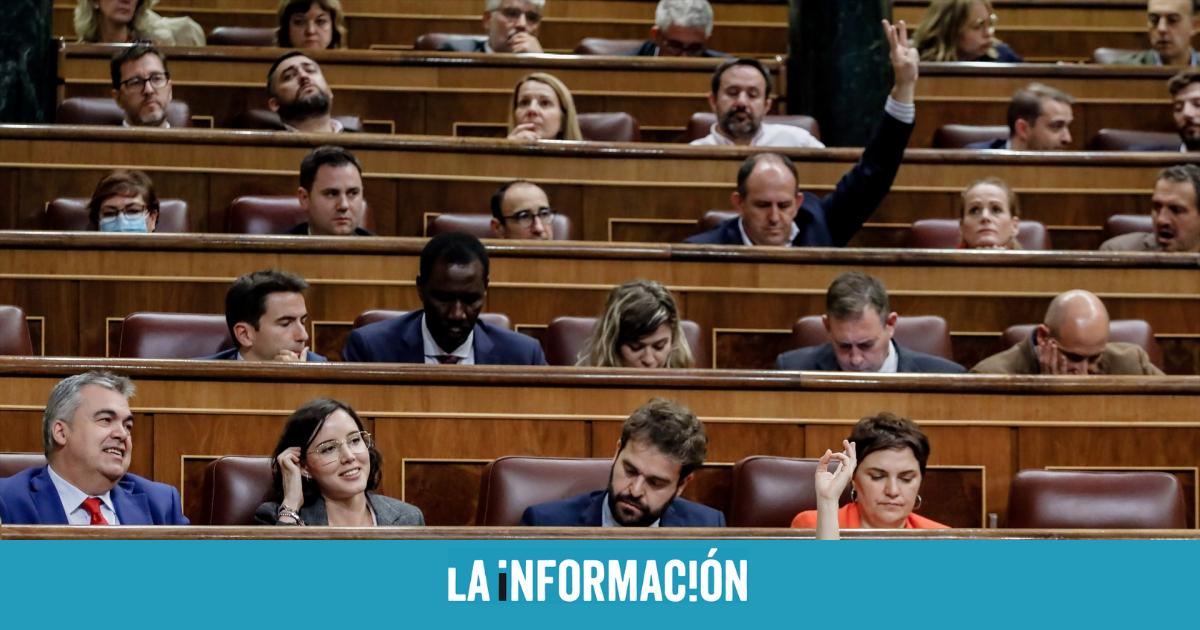 The Congress of Deputies has approved, without any votes against and with the abstention of the PP and Vox, the decree law to reduce the gas bill and raise the salary of civil servants by 1.5%. It also includes the extension of the deductions that are applied in the IRPF for the improvement of the energy efficiency of homes. During the initial intervention of the vice president and minister for the Ecological Transition and the Demographic Challenge Teresa Ribera, has announced the main lines of the decree.

Ribera has reported again that the Government will consider the extension from the limit to two kilometers of the self-consumption networks, at the request of several parliamentary groups in the commissions of recent weeks. The minister has requested the highest possible consensus regarding the measures included in the text to protect citizens and the productive fabric of the country, at a time when, as indicated, “strong tensions in European energy markets”.

The deputy of the PSOE, Maria Montserrat Garcia Chavarria, has highlighted the protection measures for families, the self-employed and the working middle class promoted in this decree. “This government has been at the height of the situation”, emphasized the deputy, highlighting the lower inflation rate in Spain compared to the rest of the European countries and the figure “record” employment for the month of October. “That is our way of doing politics,” she stressed.

The PP, through the deputy Juan Diego Requena Ruizhas begun his criticism by focusing on the Iberian exception, which in his opinion “has triggered” Russian gas demand. Likewise, he has denounced the setback on the independence of the National Commission of Markets and Competition (CNMC) to include “propaganda” in the electricity bill of consumers.

This last criticism is based on the fact that, as of the decree, information on the impact of the VAT reduction on gas will be included in the electricity bill. He has also incited Teresa Ribera in relation to the midcat pipelinearguing that the Government “was not capable of keeping the Maghreb gas pipeline open”.

For his part, the deputy from Asturias for the Mixed Group, Isidro Manuel Martinezhas shown its rejection of the validation of the Royal Decree Law by theglutination of measures which, in his opinion, should have a differentiated treatment. Miriam Nogueras, from Junts, has continued in this line of denunciation, alleging that the text could have been divided into “five or six different decrees”. “They have become accustomed to imposing lentil theoryor take them or leave them”, criticized the deputy during her speech. Jose M. Figaredofrom Vox, joined the criticism during his speech, the deputy invited Teresa Ribera to change the Spanish energy system “from A to Z”, since, in his opinion, the Government bases its energy strategies on “little patches” that don’t work.

Criticism of energy companies for their “lack of transparency”

In his speech, the EH-Bildu budget spokesman extolled the virtues of self-consumption and welcomed the extension to two kilometers announced by Ribera, although he pointed out that does not solve “all the casuistry” of the electrical system. Likewise, he has denounced the lack of transparency in some energy companies, referring specifically to the problems that citizens are encountering in order to avail themselves of the last resort fee.

On his side, the economic spokesperson for the PNV, Idoia Sagastizabalalthough he has shown his support for the decree, has pointed out the convenience of establishing some automatic mechanism for the transfer of customers to the regulated rate due to the problems that they have reported in recent weeks. In the opinion of Ines Sabanes, from More Country, the decree’s energy measures are aimed at “what is urgent so that no one gets cold” during the coming winter. Sabaés has also joined the criticism of the energy companies, which in his opinion “are torpedoing everything they can and more” the transfer to the regulated rate. That is why the deputy has demanded a greater transparency in understanding and the control of the billing systems of these companies.

Citizens Deputy, Maria del Carmen Martinez Granadoshas confirmed the support of his training for the text, although he has criticized fiscal aspects and the forms of its processing, which was approved by the Council of Ministers and left “very little margin” to the rest of the groups to “modify and improve” the decree.

Promotion of public participation in the energy sector

Juan Antonio Lopez de Uralde Garmendiafrom United We Can, has added to the criticism a situation that shows, in his opinion, a “energy oligopoly dependency”, which he has also described as “sickly”. For this reason, Uralde has urged the Government to promote public intervention in the energy sector, since, unlike other countries in the European environment, it does not have “neither a public company nor public participation in that energy oligopoly”.

In the opinion of Nestor Regoof the BNG, the decree includes in energy matters some measures that it has celebrated, such as with the expansion of self-consumption, however, it has made the lack of ambition for not betting on more far-reaching measures, alleging that “they are impossible until they are not”. In line with self-consumption solutions, Joan Capdevila (ERC) has thanked the “script twist” of the Government to increase the distance to two kilometers. “More megawatts on rooftops is less land use. Every kilowatt produced on your rooftop is a kilowatt that disappears from your bill“, it is finished.

In energy matters, the decree, approved by the Council of Ministers on October 18, collects the financing via the General State Budget (PGE) of the deficit generated by the limits on the increase in the natural gas bill for the new Last Resort Rate (TUR) of neighborhood savings for community boilers, as well as the extension of the current conditions for domestic consumers of TUR 1 and TUR 2 to limit the increase in their gas bills in a 5%which will be in force in both cases until the end of 2023. The text, which has been in force since its publication in the Official State Gazette (BOE), also contemplates aid worth 3,000 million euros from the PGE to lower the bill energy of 40% of the country’s households due to the impact of the crisis.

On the other hand, the document also approves the 1.5% compensation in the remuneration of public employees for 2022. This salary increase, agreed within the framework of the General Negotiation Table of the Civil Service, is retroactive. Therefore, this increase is added to the 2% increase in public remuneration that came into force on January 1 of this year.

The additional increase of 1.5% across the board is exceptional, as it is the first time it has occurred. The same will apply to all public administrations, including autonomous communities and local entities. Its consolidation in the current financial year means that it is applied to the remuneration in force on December 31, 2021, so the global increase for 2022 is 3.5%.