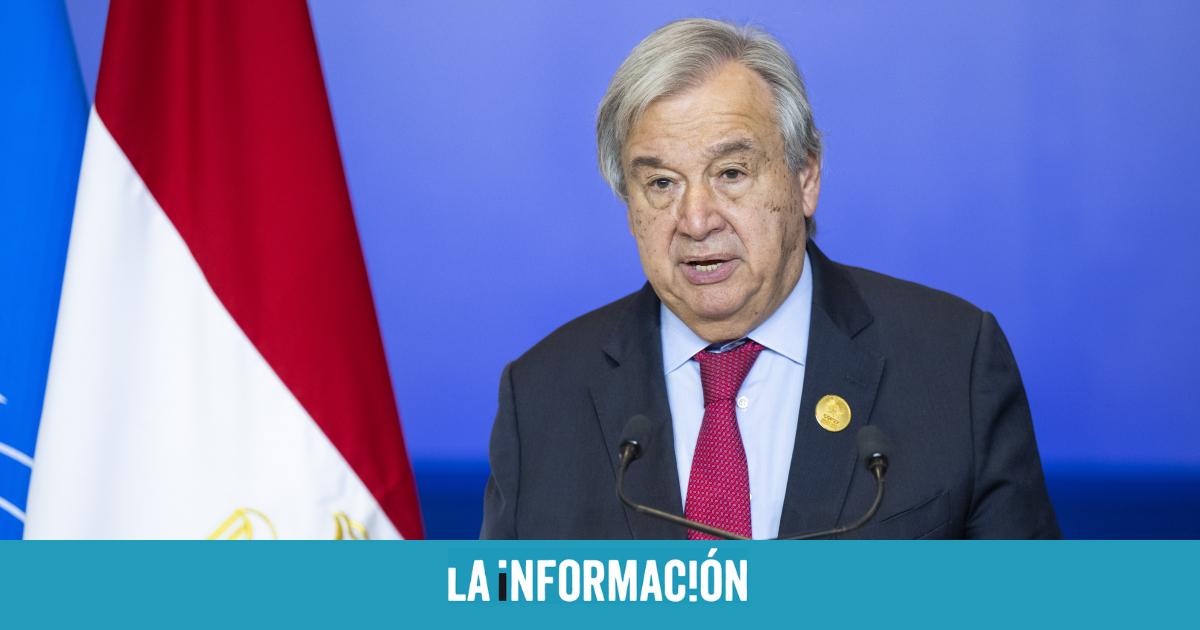 The United Nations Conference on Climate Change has adopted a resolution this Sunday that provides for the creation of a new fund intended to finance climate damage that the countries most vulnerable to the effects of global warming are already suffering, the greatest victory of a very tough summit that, however, has remained short when redefining a plan to reduce the use of fossil fuelsbeyond the guidelines followed in previous summits.

In any case, the creation of the fund, described as historic, has been adopted by consensus in the plenary assembly that put an end to the climate conference in Egypt and has been received by resounding applause from all the representatives in the stalls . Delegates agreed to establish financing mechanisms for loss and damage in the first minutes of a meeting that was called after 4 a.m. in the Egyptian city of Sharm El Sheikh, but they continued to deliberate on other issues such as the transition away from fuels and controlling the emission of greenhouse gases.

As reflected in the text, the countries have established a consensus regarding the “immediate need” to provide financial resources “new, additional, predictable and appropriate” to help developing countries that are in a vulnerable position with respect to the “economic and non-economic” impacts of climate change.

In this sense, reference is made to forced displacements and the effects on cultural heritage, mobility and life, as well as the livelihoods of communities, which is why they underline the importance of giving a “effective and adequate” response to loss and damage. The countries have agreed that those nations that emit the most emissions can also contribute to the fund, such as China and India. That was, precisely, one of the aspects that was about to blow up the summit on Saturday morning, together with the fact that it was about to of falling the objective of limiting the increase in global temperature to 1.5ºC. These issues were marked as red lines for the European Union which announced on Saturday morning that it was willing to leave Egypt without a deal because it would not be “complicit” in a bad deal.*

Nevertheless, many details remain to be worked out as the amount destined to this fund and how the payment of the losses and damages caused will be carried out. The resolution finally comes three decades after Vanuatu demanded an insurance fund for island nations from rising sea levels, Bloomberg reports.

Another novelty, this time in the area of ​​the ocean, the Sharm-El Sheikh Agreement has agreed that from 2023 ocean-related issues will be guided by two co-facilitators selected by the parties every two years who will be responsible for directing the process. dialogue, in consultation with the parties and observers, and will prepare a summary of issues that will be taken to the summits.

The agreement has been reached during last-minute negotiations on how to deal with the growing death toll from climate change in developing countries that have contributed little or no to harmful emissions.

For his part, the Secretary General of the United Nations, António Guterres, has welcomed the approval of this fund, which constitutes “a political symbol to rebuild lost trust”, although he regretted that “clearly this is not going to be enough.” “The voices of those who border the climate crisis must be heard. The United Nations will support these efforts every step of the way,” he assured, after assessing that this summit It has been an “important step towards justice”.

The deal on loss and damage is a milestone in global climate policy: a recognition that the richest nations are responsible to the developing world for the damage caused by rising temperatures.

But the contentious summit, against the backdrop of a global energy crisis sparked by Russia’s invasion of Ukraine, has exposed serious disagreements over how the world should navigate the transition away from fossil fuels, and has fallen short. when promoting previous COP ambitions for Control harmful greenhouse gas emissions.

The result, endorsed by almost 200 countries in the early hours of Sunday, is a disappointment for the European Union, which had begun on Saturday by threatening to withdraw if the text did not strengthen the ambition to reduce carbon emissions. Despite some minor changes, it largely reiterated the language of last year’s Glasgow meeting, without reaching a broader commitment to phase out fossil fuels, rather than just coal, nor a target to reduce global emissions by 2025.

“While the progress in loss and damage is encouraging, it is disappointing that the decision largely copied and pasted Glasgow language on reducing emissions, instead of taking significant new steps,” the executive director of the World Resources Institute, Ani Dasgupta. “It’s mind-boggling that countries haven’t mustered the courage to call for phasing out fossil fuels, which are the main driver of climate change,” she lamented.

The breakthrough on loss and damage comes after a series of last-minute negotiations over how to address the growing toll that climate change is taking on developing nations that have contributed little to the greenhouse gas emissions that drive the phenomenon. The problem took on a new urgency. after the monsoon floods this summer in Pakistan that left more than 17,000 dead and caused losses of at least 30,000 million euros.

Simply putting the issue on the formal negotiating agenda was seen as a milestone, but, even then, it seemed unlikely that the COP27 talks would result in a new fund. “A mission of thirty years of development has been accomplished,” said Molwyn Joseph, Minister of Antigua and Barbuda and chair of the AOSIS group of small island nations. “Our ministers and negotiators have endured sleepless nights and endless days in a intense series of negotiationsbut after pain comes progress,” he adds.