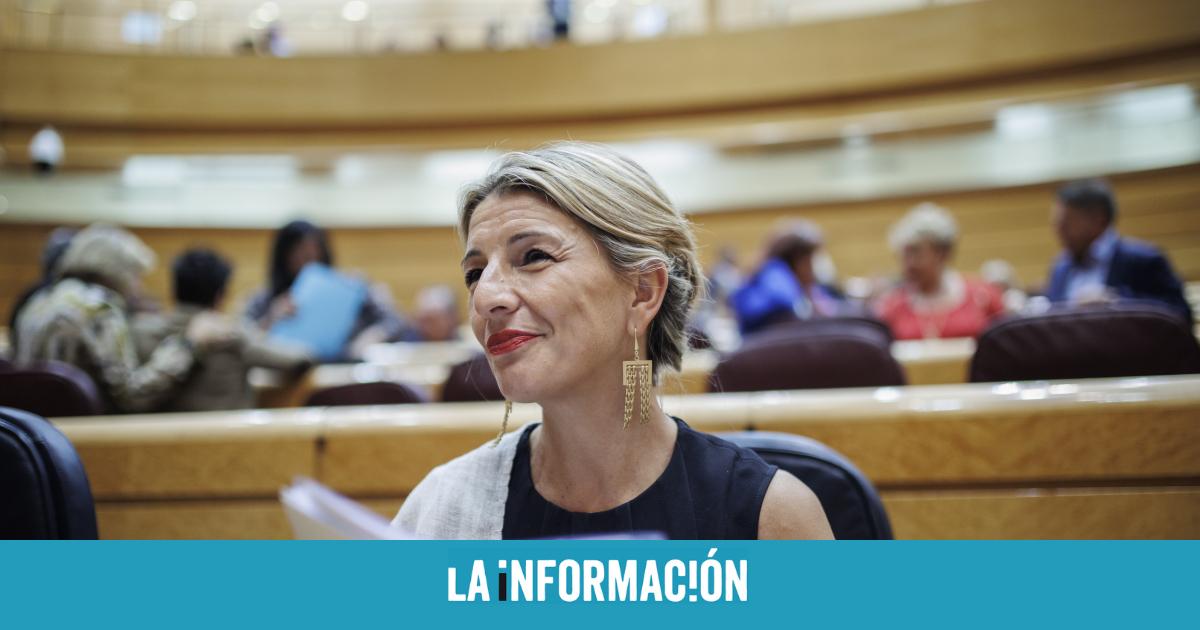 Yolanda Díaz stands up to the bank for the new relief measures that she proposes for the mortgaged and that are being negotiated with the Ministry of Economic Affairs. “They are not enough”, has sentenced the vice president second of the Government and Minister of Labor and Social Economy, who has claimed that more progress needs to be made on this proposal. The negotiation that has been opened between the bank and the Executive, in his opinion, “is not enough” to help the most vulnerable families affected by the historical escalation of the Euribor. Díaz has requested that measures be approved that “are at the height of the country” because “Very complicated situations can arise.”

In statements to the media -reported by Efe- during the inauguration of the Conference of the Social Commission organized by Judges and Judges for Democracy, the vice president has assured that the large Spanish banks are “getting rich” with the rise in interest rates interest rate approved in recent months by the European Central Bank. Thus, according to Díaz, the banks “They are benefiting from the rate hike, they are getting richer” to the point that “it is impossible” for Spanish families to pay their mortgage. In addition, it has transferred the idea that the sector also obtains more return from companies.

Finally, Díaz has argued that “there are moral reasons” to help mortgaged families, after assuring that interest rates are “provoking the largest transfer of income from citizens to financial institutions“. “I was happy to hear yesterday (Antonio) Garamendi -the president of the CEOE employers’ association-, because interest rates are also making the financing costs of companies more expensive”, he added.

The proposal of the banking entities to deal with the payment of the mortgage installments consists of extending the term of the variable mortgages contracted by vulnerable families who have seen their payments rise significantly due to the rise in the Euribor. According to a draft of the royal decree approving this temporary protocol for extension of deadlines for debtors to which Europa Press has had access, the protocol would be in force for 12 months from the date of publication in the BOE and would be voluntary adherence by credit institutions, that they must inform the Bank of Spain about the operations that they formalize by virtue of it.

The maximum extension period mortgage loan will be for five years, provided that the repayment term of the loan does not exceed 40 years from its granting (in this case the maximum term will be that which determines a total duration of no more than 40 years) and that the installment resulting from the novation is not less than the last existing before the revision of the type.

Once the bank and the client agree on the extension of the amortization period, the outstanding principal of the loan will be amortized through thes new periodic installments and will continue to accrue the corresponding interest in accordance with the initially agreed clauses. Thanks to the lengthening of the term, the amount of the periodic installments of the mortgage loan that would result from the increase in the interest rate.

To benefit from the measure, debtors must meet a series of requirements, such as that the mortgage has become more expensive by 30% after updating the rates

To benefit from the measure, debtors must meet a series of requirements, such as that their mortgage has become more expensive by 30% after the rate updatethat family income does not exceed three times the Public Indicator of Income with Multiple Effects (Iprem) per year in 14 payments (that is, 24,318 euros per year) and that, after reviewing rates, the mortgage payment exceeds 40% of the net income of the family unit.

Once a client requests the modification of the conditions of their mortgage under the new protocol, the entities will have a period of 45 days to respond. Yes ok from the financial sector employers (AEB and CECA) have not commented on this proposal, the CEO of Bankinter, María Dolores Dancausa, pointed out this Thursday, during the presentation of the bank’s results, that it is “a principle of agreement that is not completely closed” and that It will be framed in the Code of Good Practices that the Ministry of Economic Affairs has assured that it wants to reinforce as soon as possible.

For her part, the First Vice President of the Government and Minister of Economic Affairs and Digital Transformation, Nadia Calviño, has guaranteed help to the families affected by these mortgage increases. “The financial sector is putting different proposals on the table. I welcome all these proposals,” he said.

The teams “They are right now in Madrid analyzing its so that as soon as possible we see which ones can be the most effective, keeping in mind the interest of Spanish families, of Spanish citizens who are significantly affected by this change in the financial scenario and the increase in reference interest rates on mortgages”, Calvino stated.

The Minister of Economy added that they have been working with the Spanish financial sector for a long time to try to solve the problems of financial inclusion, and highlighted the progress “in the provision of financial services to the elderly and people with disabilities”. The Government is now working on “a range, a catalog of measures that can serve to alleviate the financial situation of Spanish families in the face of the rapid rise in interest rates”, according to the minister.

Calviño met this Thursday with the president of the European Central Bank (ECB), Christine Lagarde, and has subsequently participated in the Book Fair in Frankfurt to present the PERTE project of the New Digital Economy. He has explained that she shared with Lagarde this joint work with the financial sector.

Calviño has indicated that he has spoken with the ECB teams about the temporary bank tax that the Government has proposed for 2023 and 2024. He pointed out that the central bank is currently analyzing what are the aspects to take into account when establishing this type of levy in relation to financial supervision and stability.

The tax raised by the Government supposes a temporary surcharge of 4.8% on the interest margin

“These are all issues that, of course, We have analyzed in depth by the Government before presenting the proposal for the tax and I am confident that the parliamentary process will move forward quickly”, he pointed out. The tax proposed by the Government supposes a temporary surcharge of 4.8% on the interest margin and on the net commissions obtained by entities with revenues greater than 800 million euros in 2022 and 2023, with the aim of raising a total amount of 3,000 million euros.

As for her meeting with Lagarde, the first vice-president has affirmed that sIt has been a “constructive” meeting, although he has indicated that they meet “very frequently”. They have exchanged points of view on the economic situation and current challenges, just like this Wednesday in the presence of King Felipe VI.

how do i know if i have the right